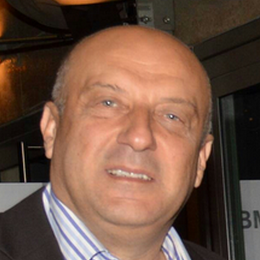 Professor of Physiology and Chair&Founder, PhD Program in Physiological Sciences,

Dr. Djuric published 747 different publication units in English, German, Russian and Serbian languages, with 123 full-length papers in peer-reviewed journals plus 7 editorials, introductions and reports from meetings all indexed in JCR/ISI list; and plus full-length 15 papers indexed only in PubMed as well as 30 chapters in books/monographs; he wrote or edited 4 monographs about endothelium, atherosclerosis and nutrition (in Serbian language), and edited/co-edited 12 books of abstracts from scientific congresses/conferences (all in English language). He was cited more than 1400 times, and was invited for presenting the lectures 74 times in Serbia as well as 43 times abroad at different foreign institutions and international meetings. He was reviewer many times in international and domestic scientific journals, and served on editorial boards of the following journals: Canadian Journal of Physiology and Pharmacology (Associate Editor), Molecular and Cellular Biochemistry, Acta Physiologica Hungarica, Experimental and Clinical Cardiology, Pathophysiology, Mediterranean Journal of Nutrition and Metabolism, Medical Science Monitor Basic Research, Curent Research: Cardiology, Yugoslavica Physiologica et Pharmacologica Acta, Serbian Journal for Experimental and Clinical Research, Archives of Medical Sciences – Atherosclerosis Diseases (Section Editor), Reviews in Cardiovascular Medicine (IMR Press); furthermore, he was a member of editorial board of CV Network (global bulletin of the International Academy of Cardiovascular Sciences) (2007-2015). He was a guest editor or co-editor in a few special issues of certain journals from JCR/ISI list: Acta Physiologica Hungarica (2006); Canadian Journal of Physiology and Pharmacology (2008, 2016, 2019); General Physiology and Biophysics (2009); Medicinal Chemistry (2012); Current Medicinal Chemistry (2018); and Oxidative Medicine and Cellular Longevity (2018-2019). He has been invited as a reviewer for book’s proposals (international publishers: Elsevier and Springer Nature). He was abstract grader at large international meetings, reviewer on different grant’s proposals (Serbia, Poland, Slovakia, Hungary, Canada), foreign member of dissertation committee (Slovakia), proposer for the position of full professorship in the field of physiology and pathophysiology (Romania), and proposer for prestigious fellowships in Germany, Sweden, Canada and USA.

He was a co-editor of the translation to Serbian language of the whole edition of the Textbook of Medical Physiology by Guyton AC and Hall JE in 2008 (Saunders 11th ed.), co-editor of the chapter translation of the Ganong’s Review of Medical Physiology by Barrett KE, Barman SM, Boitano S, Brooks HL in 2015 (McGraw-Hill/Lange Basic Science 24 ed.) as well as editor/co-editor of 4 textbooks and demonstration manual in the field of medical physiology in Serbian language.

He organized/co-organized numerous scientific meetings and activities in Serbia: the first Yugoslav congress on atherosclerosis (Belgrade, 2001), satellite symposium of XIV International Symposium on Atherosclerosis (IAS Belgrade, 2006), international conference on nutrition and cardiovascular health (Novi Sad, 2007), 2nd European section meeting of the International Academy of Cardiovascular Sciences (Belgrade, 2015), and jointly held 6th Meeting of European Section and 7th Meeting of North American Section of the International Academy of Cardiovascular Sciences (IACS) (Vrnjacka Banja, 2019). He also organized/co-organized 4 congresses of physiological sciences (2005, 2009, 2014, 2018, respectively) as well as 8 conferences and meetings of physiological sciences with international participation in Serbia (2003, 2004, 2008, 2011) including jointly held Serbian-Slovak (2013, 2016, 2019) and Serbian-Hungarian bilateral physiological  meetings (2017). He was also organizer of the jubilee symposium on the occasion of the 90th anniversary of the founding of the Institute of Medical Physiology “Richard Burian“at Belgrade University Faculty of Medicine (2011). He organized the celebration of the 80th anniversary of the installation of a memorial plaque in the lobby of Institute of Medical Physiology, Faculty of Medicine University of Belgrade, in honour and memory to Scottish doctor Elsie Maud Inglis, which was a heroin in the First World War and a leader of the famous military unit entitled “Scottish Women’s Hospitals”) (2009).

He served many times as a co-chair of the sessions at different meetings; at FEPS congresses (Bratislava 2007, Budapest 2014); he organized thematic symposia on nitric oxide and cardiovascular regulation (FEPS Bratislava 2007); he co-organized the symposium on nutrition and cardiovascular health, and new perspectives in prevention and therapy (FEPS Budapest 2014). He served as a member of Homocysteine Expert Panel (Germany); he served as a member of the International Lipid Expert Panel (ILEP, 2015-present) and Lipid and Blood Pressure Meta–Analysis Collaboration (LBPMC) Group (2017-present). In addition, he served as a member of the scientific/organizing committee at the global international conference entitled “Advances and Controversies in B-Vitamins and Choline” (Leipzig, Germany, 2012), a few times at congresses of the International Atherosclerosis Societies (IAS), and as a member of the organizing committee of the FFC’s 26th International Conference on “Functional Foods, Bioactive Compounds and Nutraceuticals in Health and Disease” (2019, San Diego, USA). He was principal investigator in national-funded grants in Serbia (since 2005), and now he participates as a member of the managing committee of the COST action [CA16225 RS] “Realising the therapeutic potential of novel cardioprotective therapies (EUCARDIOPROTECTION)”. He served also as a member of the managing committee of the COST action  [BM1005 Biomedicine and Molecular Biosciences]  “Gasotransmitters: from basic science to therapeutic applications (MC, ENOG: European Network on Gasotransmitters, 2011). His researchs was supported by grants from Kerckhoff Klinik GmbH, Bad Nauheim, Germany; Solvay Pharma, Hannover, Germany; and Pfizer GmbH, Belgrade/Serbia.