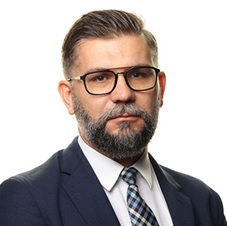 Prof. Maciej Banach was an Undersecretary of State at the Ministry of Science and Higher Education of the Republic of Poland (2010-2012). He is a President of Polish Mother’s Memorial Hospital – Research Institute (PMMHRI) (February 2014-), Head of Cardiovascular Research Centre at University of Zielona Gora, full Professor of Cardiology at the Medical University of Lodz (MUL) and PMMHRI, Head of Foreign Affairs Office (2012-2014), Head of Department of Hypertension (2008-) at the Medical University of Lodz and Professor in the Department of Nephrology, Hypertension and Family Medicine, Chair of Nephrology and Hypertension, at the WAM University Hospital in Lodz, Poland (2009-).

He is member of the Executive Committee of European Atherosclerosis Society (EAS) working as an Advisor in Matters related to European Union Relations/Contacts, and the International Atherosclerosis Society (IAS) Regional Federation Executive Committee Member for Europe. He is a Founder and Head of the Polish Lipid Association (PoLA) (2011-) – the official partner of National Lipid Association (NLA, US) and Lodz Chapter of Polish Society of Hypertension (2009-). He is the founder of the Lipid and Blood Pressure Meta-analysis Collaboration (LBPMC; lbpmcgroup.umed.pl) Group (2012-) – a group of over 150 worldwide experts aimed to investigate the most important issues in the field of lipid disorders, hypertension, nutrition and cardiovascular risk, as well as the International Lipid Expert Panel (ILEP; ilep.eu) (2015-), currently with >50 national society members, which has been founded to prepare recommendations in the area of preventive cardiology in the most debatable issues that have not been covered in the existing guidelines. He is also a member of the REPROGRAM Consortium – a group of experts challenging with Covid-19 pandemic, member of 2 largest worldwide databases – the Global Burden of Disease (GDB) (University of Washington, Seattle, US) and Non-Communicable Diseases Risk Factor Collaboration (NCD-RisC, Imperial College of London, UK). He is also Founder and President of the foundation – Think-Tank “Innovation for Health”, which gathers six main health research institutes and over 40 medical business representatives in Poland with main aim to make innovations in the medical area in Poland. He is a Visiting Professor of University of Alabama at Birmingham (UAB) and University of Medicine and Pharmacy Victor Babes in Timisoara, Romania (2014-).

He is Editor-in-Chief of the Archives of Medical Science (IF2019 = 2.807), Archives of Medical Science – Civilization Diseases, and Archives of Medical Science – Atherosclerotic Diseases, Editor in Chief of the Cardiology Section in Journal of Clinical Medicine, Scientific Coordinator of the HeartBeat Journal, Regional Associate Editor of European Heart Journal – Quality of Care and Clinical Outcomes, Deputy Editor of Thyroid Research and Clinical and Experimental Medical Letters (2007-2012), Associate/Section Editor of Recent Patents on Cardiovascular Drugs Discovery, BMC Medicine, Scientific Reports, Biomed Research International and The Open Atherosclerosis & Thrombosis Journal, and member of Editorial Advisory Board of over 50 international medical journals. He is also a Faculty member of F1000 prime. He is Reviewer of over 80 international journals, including New England Journal of Medicine, European Heart Journal, Lancet Diabetes & Endocrinology, Circulation, Circulation Research, British Medical Journal and Journal of American College of Cardiology; editor or author of 31 books (102 chapters). He is also a Scientific President (2016-) of the Termedia Publishing House, being responsible for over 50 scientific journals.

He is a fellow of the Council for High Blood Pressure Research of the American Heart Association (FAHA), National Lipid Association (FNLA), American Society of Angiology (FASA), European Society of Cardiology (FESC), Royal Society for Public Health (FRSPH) and Society of Geriatric Cardiology (FSGC; 2008-2010). He is a member of the working-core of Alliance for Biomedical Research/European Council for Health Research (2011-2013 and 2016- being as a EAS representative), steering committee of European Innovation Partnership in Active and Healthy Ageing (2010-2012) at the European Commission, member of the European Commission’s Scientific Panel for Health (SPH) (2014-2017), and steering committee of Centre for Good Aging / Healthy Ageing Research Center (HARC) at the Medical University of Lodz, member of Committee for Public Health of the Polish Academy of Sciences, member of the Scientific Board of Institute of Sport in Warsaw, Poland, and the Presiding Board of Scientific Committee of the Polish Ministry of Health (2015-). He is an expert of the European Medicines Agency (EMA, 2018-), and member of prestigious EU Academy of Sciences (EUAS; 2018-).

He is a laureate of several prizes and award, including: Doctor Honoris Causa of the Medical University in Kosice, Slovak Republic (2020), on Top-100 List of the most influential scientists in medicine in Poland for year 2020 (10) and 2019 (9), Doctor Honoris Causa of the Carol Davila University of Medicine and Pharmacy in Bucharest, Romania, “Gold Scalpel” Distinction in 2019 for the Innovation (Smart Hospital); Honorary Member of the Romanian Society of Cardiology (2019), Doctor Honoris Causa of the Institute of Cardiology in Kiev (2018), and the University of Medicine and Pharmacy Victor Babes in Timisoara (2017); Gold Honorary Medal for scientific achievements of the Medical Faculty of Medical University in Kosice, Slovak Republic (2018), The Manager of the Year 2016 – Public Entities (2017), “Innovator of the Year – Science Category” by Wprost journal (2017); “Gold Scalpel” Distinction in 2016 for the Innovation; The Personality of the Year 2013in Poland for the development of science in the field of healthcare – founded by the Heath Manager journal (Termedia Publishing House), Super-Talent in Medicine 2012 Award – the winner of the competition for young scientists in medicine (up to 40) founded by Puls Medycyny journal; scientific awards of Ministry of Health of Republic of Poland for the cycle of publications (2009, 2011), >40 individual and group scientific awards of President of Medical University of Lodz (2009-2020); START Award (2008) and Conferences Awards (2005, 2007) of Foundation for Polish Science, Polityka journal Awards for Young Scientists (2006), and Travel Grants of European Society of Hypertension (2007) and Heart Failure Association of ESC (2005, 2007).