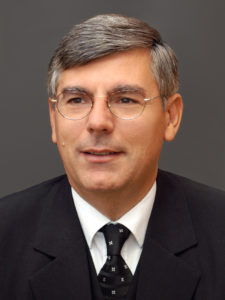 Professor Zeljko Reiner was born in 1953 in Zagreb, Croatia and he got his MD and  PhD degrees on Zagreb University. He was visiting scientist in USA, Germany and France and consultant in internal medicine, endocrinology and metabolic diseases in Zagreb University Hospital Center. He was for 8 years director general of the University Hospital Center Zagreb, Croatia and is for last 10 years the head of the Metabolic diseases department in the same hospital. Since 1988 he is full professor (tenure) in School of Medicine, Zagreb University. He is a Fellow of the Royal College of Physicians (London), Fellow of the European Society of Cardiology (ESC), and Fellow of the American College of Cardiology (FACC). For many years he was chairman of the Department of internal medicine at the University of Zagreb. He was the founder and is still the president of Croatian Atherosclerosis Society, founder and vice-president of Croatian Obesity Society, founder of Croatian Hypertension Society and was Secretary general of the Croatian Medical Association.  He was member of the WHO  Executive board in Geneva where he was representing Europe, and was  chairman of the WHO Tobacco – free Europe Committee. He was also one of the 3 members of the WHO’s “Leon Bernard Prize” committee. From 1993 to 1998 he served as deputy minister of health, and from 1998 to 2000 as minister of health of Croatia. He is a full  member of Croatian National Academy of Sciences and Arts (only 20 members in the field of medicine) and chairman of it’s Atherosclerosis Research Committee.  Since 2004 to 2012 he was president of Croatian Academy of Medical Sciences (member since 1990). He was also president of the Croatian national health council since  2007 to 2012. He was member of the International advisory boards  of  almost all European Atheroslerosis Society (EAS) and International Atherosclerosis Society (IAS) congresses in the  last 25 years, and invited lecturer at many international meetings as well as a member of the European Society of Cardiology (ESC) Congress Programme Committee. He was member of the IAS Executive board for one term. He was a member of the EAS Executive Committee and was engaged as an expert of the European Commission for the evaluation of project proposals received under the FP6 and FP7 for research and  technological development. He was a member of European Joint Prevention Committee for Cardiovascular Diseases where he is representing EAS, He is one of the authors of the Joint European guidelines on cardiovascular disease prevention in clinical practice, he was the first author of the first  the ESC/EAS European guidelines on management of dyslipidemias and was the Chair of the European Association for Cardiovascular Prevention and Rehabilitation (EACPR) Board Committee on Science and Guidelines as well as a member of the ESC Committee for Practice Guidelines. He  is on editorial boards of several journals (JACC, Nature Reviews Cardiology, Atherosclerosis, Nutr Metab Cardiovasc Dis etc.) and is reviewer for a number of journals (Lancet, Europ J Prev Cardiiol, J Am Coll Nutr, Ann Nutr Metab, J Cell Biochem, etc.). He has published many papers, a significant number of them in indexed journals with high impact factor, and was editor or coauthor of 32 books. His main interest for a number of years is lipidology and pathophysiology of atherosclerosis, and the last 20 years he is recognized as one of the leading persons in preventive cardiology in Europe.